A painting that was started by my son, then my wife and finished by me in honour of my grandma. This isn't the exact painting I would normally produce but I'm really happy with the way it turned out especially considering the varied input. 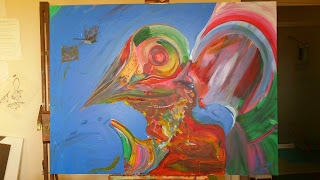 Posted by Unknown at Thursday, November 13, 2014 No comments:

Its been a while but I'm still around! I've been hard at work getting some paintings done for the encaustic conference in Ptown. While doiong this I have been experimenting with different types of alcohol based mediums for the balga resin, which I will discuss further in a future post.
Posted by Unknown at Thursday, January 30, 2014 No comments:

In this our post-post-modern age of "enlightenment", "advancement" and "rational thinking" that we generally follow as Westerners (you know, aside from the 31% of present day Americans who, according to Wikipedia, believe in Creationism. That's over 100 million people.) it is encouraging that many communities in Europe, the heart of Western Civilization, still dress up every year to follow the old ways of scaring away misfortune and blessing crops, babies and churches. Here in Australia, people have done an excellent job of homogenizing to the point where people only really get excited about immigrants, sport and century old wars that happened somewhere else. Watch this video. It is scary, it is gorgeous, it is disturbing and it is inspiring. Can't wait to get hold of the book myself.
Posted by Unknown at Monday, December 09, 2013 No comments:

So in a move that shatters that small amount of wow factor that the Art Gallery of WA had managed to build up since the ensconcing of gifted head curator, Stefano Carboni, AGWA has released a statement, seen here, that the monstrously successful MoMA lent series of exhibitions will be stopping with the current exhibition rather than completing its intended number of exhibtions. To put it into perspective; Dr Carboni is the former head curator of the Museum of Modern Art in NYC and emigrated to Dullsville in order to take up a real challenge - he took over as head of the Art Gallery of WA in Perth. It would be kind of like P!nk deciding that she is tired of the glam and decides to focus on karaoke venues in Northbridge.
The culprit? Well that would depend on who you asked. The state government may be digging an $800 million hole in the river foreshore, but dear reader, it was unassailably YOUR fault, because you didn't go and see the exhibition enough times. Actually that is crap, because a bucket of people DID go and see it and apparently loved it and went and saw it a bucket more times. What has relegated AGWA back to the 'one good painting on show at a time' situation of pre-Carboni is that the state government has still got to pay for the aforementioned hole in the river bank and can't rely on the federal government to make up the shortfall and discontinuing all contracted workers in the state government wasn't enough, so they cut the budget of AGWA too. Think on that for a mo; AGWA is now so cash strapped tha they can no longer afford a SUCCESSFUL international show. I pity us all the next few years of this shit.
Posted by Unknown at Wednesday, November 27, 2013 No comments:

Remembrance Day - Lest We Forget 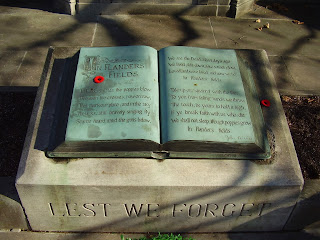 
Bent double, like old beggars under sacks,
Knock-kneed, coughing like hags, we cursed through sludge,
Till on the haunting flares we turned our backs
And towards our distant rest began to trudge.
Men marched asleep. Many had lost their boots
But limped on, blood-shod. All went lame; all blind;
Drunk with fatigue; deaf even to the hoots
Of tired, outstripped Five-Nines that dropped behind.

Gas! GAS! Quick, boys! -- An ecstasy of fumbling,
Fitting the clumsy helmets just in time;
But someone still was yelling out and stumbling
And flound'ring like a man in fire or lime . . .
Dim, through the misty panes and thick green light,
As under I green sea, I saw him drowning.

In all my dreams, before my helpless sight,
He plunges at me, guttering, choking, drowning.

If in some smothering dreams you too could pace
Behind the wagon that we flung him in,
And watch the white eyes writhing in his face,
His hanging face, like a devil's sick of sin;
If you could hear, at every jolt, the blood
Come gargling from the froth-corrupted lungs,
Obscene as cancer, bitter as the cud
Of vile, incurable sores on innocent tongues, --
My friend, you would not tell with such high zest
To children ardent for some desperate glory,
The old lie: Dulce et decorum est
Pro patria mori.﻿

I have been invited to attend the 8th International Encaustic Conference and Symposium in Provincetown, Massachusetts, in the States, after winning one of only 3 International spots to gain a scholarship. I think I can be justifiably stoked! The event happens in June 2014 and I have been awarded one of three international scholarships that cover the cost of the 3 days of talks and classes. I wanted to thank everyone involved in this event, particularly Cherie at Truro Art Center, who struggled through my accent and gave me all the info that I needed including what whales to see while I am there. I'll also be having a show at the same time in Provincetown, and then a show up in Toronto. Its going to be a busy month!
Posted by Unknown at Wednesday, October 30, 2013 No comments:

Robyn Hosking is an Australian based artist whose work in ceramics is a bit whimsical and a bit joyous without falling into the trap of being a bit crap and kitsch. Kitsch of course is a term that gets overused and misunderstood; it is a term that describes cultural parapheanlia, rather than something that is cheap and nasty. Today's kitsch will eventually be in museums. However, Hoskings stuff will be in museums because it it is very good and not because it is kitsch. 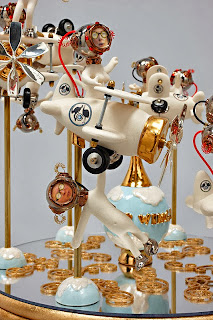 The above sculpture is clearly an aeroplane and uses the former Australian Prime Minister, Julia Gillard's face equipped with goggles. A two time former Prime Minister, Kevin Rudd, Hangs from the bottom, obviously refusing to let go. With the other aeroplanes buzzing around, it doesn't look as much like a dogfight as much as it looks like a flying circus, which is basically what became of the Australian Labor Party in recent years. In fact one of the only problems with Hosking's work is hidden right there; it is very current. There is a different Prime Minister now and the relevancy of Hosking's work is already somewhat faded. Despite being such a beautiful work, Australians have very short memories when it comes to politics. Perhaps I was worng in my previous assertation that this was not kitsch. Perhaps it is kitsch because it is paraphenalia of the political-cultural institution. You can view Hosking's own blog here, which I hope you will do.
Posted by Unknown at Wednesday, October 30, 2013 No comments: